Double Joker Poker is available at all good Microgaming-powered casinos on the net. It plays out like regular video poker online, with one interesting difference: Jokers are included and act Wild.

Double Joker Poker is easy to play, and players can bet anywhere from one to five coins per hand. As with all regular versions of video poker, you can also double your winnings with a separate "Gamble" round.

At CasinoOnline.com, we only review and rate the top gaming sites on the internet. All of our picks feature great bonuses to get your video poker journey off on the best foot.

Casino Online will allow you to:

At the start of a Double Joker Poker casino game, pick how many coins you want to bet: 1 to 5. Hit the 'Deal' button and your five cards will be dealt out.

Now you have the option to Hold (keep) any of the five cards or redraw them. Click on the cards you want to keep and hit the 'Draw' button. If you make a qualifying hand that matches the paytable, you win.

Note that the computer will usually automatically hold any good cards. If you disagree with the computer's choices click on the cards to release them, then hold your own.

Three Of A Kind 2

How to Bet on Double-Or-Nothing

After any winning hand, you can try to double your payout. Hit the 'Double' button and you'll see four down cards and one face up. Click on the down card you think is higher than the up-card. If you guess right, you double up. Players can keep doubling up, or simply hit the 'Collect' button to take your money.

Double Joker Poker can be a fun real-money gambling game if you like Wild cards. The joker doesn't come up often, however, and the two-pair minimum means you may lose a lot before you start winning.

However, because the game is designed by Microgaming, you will usually find plenty of other video poker action alongside the game at most casinos.

Picking a solid casino online is essential. It should have a good license and excellent reputation on payouts and customer satisfaction. It should also allow fee-free deposits and fast withdrawals.

Double Joker Poker is a great video poker variant for players who love their wild cards. It might be hard to trigger the bigger wins but with a 4,000-coin jackpot there's plenty to aim for.

At CasinoOnline.com, we pick out the very best gambling websites in 2022. All of our picks feature top bonuses and great offers all year round.

When you sign up, you can enjoy some amazing welcome bonus offers. Just make an initial deposit and start gambling on real-cash Double Joker Poker games straight away. If you clear your deposit amount you can put the cash towards increasing your coin limits. Who knows where your gambling video poker journey will take you? 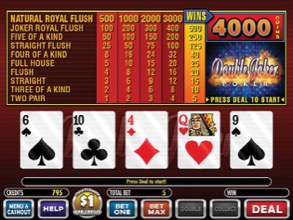 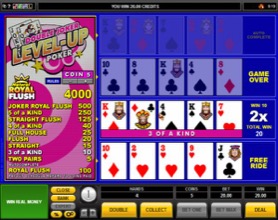 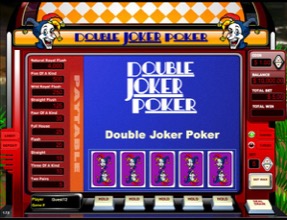 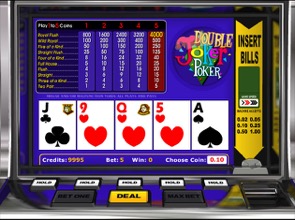 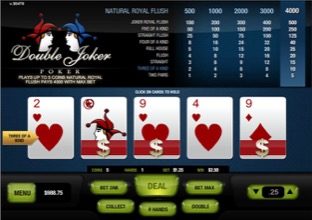 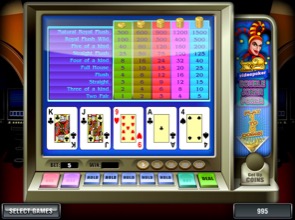 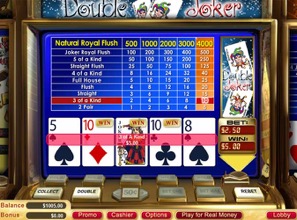 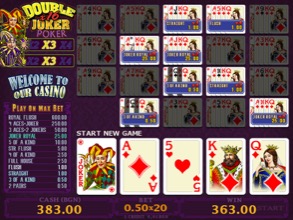 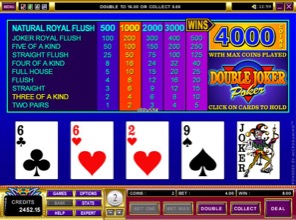 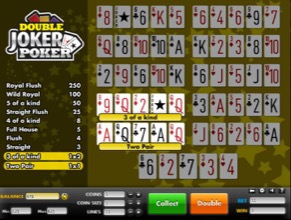 What is Double Joker Poker?

Double Joker Poker is just one of many different variations of video poker. It differs from the rest for one main reason: there are two jokers added to the pack, and these can be used to replace any other cards to create winning hands.

Players are initially given five cards, and they then have to decide which they want to keep, and which they want to change for new ones. The resulting hand will be their final one, and they’ll receive a prize if their hand is good enough to match a hand on the paytable. There is then often the chance to double a win by using the gamble feature, although more experienced players avoid this.

How does it compare to other video poker games?

The basic gameplay of Double Joker Poker is the same as other variations, however the fact that it features two jokers adds a new dimension to the game. These added jokers do mean that the minimum hand required for a win is higher though, as players will have to hit at least three of a kind to be a winner.

Double Joker Poker is extremely popular among online casino players, therefore it is offered by loads of different casinos. Some of the more popular casinos offering this game to players include Betsoft and Spin Palace.

The best hand you can possibly get when playing Deuces Wild is a natural Royal Flush, which means a Royal Flush created without using any wild symbols. This pays players an amount of 800:1. A Royal Flush containing a joker is also a great hand to get, with a value of 100:1.

Unlike some other video poker variations, Double Joker Poker doesn’t have an RTP of over 100%, however it is pretty close. This is because the RTP is 99.97%, meaning that players should expect to lose, on average, $0.03 for every $100 they bet at this game.

Is it possible to use a strategy?

Is there a mobile version?

Those looking to play Double Joker Poker on their mobile devices are in luck, as many casinos offer a mobile version of this game. What’s more, the game will be virtually identical to the desktop version, in terms of gameplay and prizes.

Is it safe to play?

Many people are concerned about security at online casinos, however we’ve looked through most online casinos and evaluated the levels of safety that they offer. Therefore, you’ll always remain safe if you use a casino that we have recommended.

Double Joker Poker is a popular video title that differs from traditional video poker in that it has two Jokers! As a result, wins (particularly big wins) are more common and this gives the game a real feeling of excitement. To find somewhere to play Double Joker Poker, along with other video poker titles, follow any of the links to the right.