Caribbean Stud Poker is a popular spin off of poker that was developed for Vegas casinos over a decade ago. At online casinos, Caribbean Stud Poker can regularly be seen at the top of the list of players’ favorites; most notably for the inability to bluff, the progressive jackpot and its overall simplicity.

This page is for you if:
Read more
1.

How to Play Caribbean Stud on the Net

Set around a table, casino online Caribbean Stud Poker differs from traditional Stud poker in that you do not play against other players, but rather the dealer.

Another difference with this gambling game is all players will be dealt five cards at once and not one card at a time with a betting round after each.

Finally, this online casino poker game comes with a tempting side bet which gives players the chance to win multi-figure progressive jackpots.

The house edge for Caribbean Stud Poker is quite high, around 5.2% percent. This often turns people away before they understand that with a bit of strategy, this can be significantly reduced. Learning the strategy is not difficult, but you will need to practice. Of course, if you get a good run of strong hands, the payout can be very rewarding.

There’s much to learn about Caribbean Stud, and on this page you can:

Most major developers have their own version of Caribbean Stud, but the games tend to work in the same way.

The rules are similar to 5-card Stud. Players are dealt five cards each after placing an initial bet called and 'ante'. Players simply drag the chips to the ANTE spot on the on-screen table to get started. The Dealer will also receive five cards, with the first one showing. This gives players a small insight into the quality of the dealer's hand.

Based on your starting hand, you can play the hand or fold (discard it and take no more actions). If you carry on, you add chips to the 'Bet' spot and must beat the dealer's own five-card hand. The dealer, however, must first "qualify" by holding a hand with at least an ace and a king, or a pair.

How to Play and Gamble Onon the Move

The beauty of Caribbean Stud games from developers like NetEnt and Microgaming is that gamblers can bet on the move. Many Stud real-money games online have been adapted for play on mobiles. With a single tap you can place antes, bets or fold on your Android or iOS device.

Most of the big casinos online have at least one Caribbean Stud variation. Play for a few cents or hit your bankroll hard and go for the progressive jackpot.

For poker players looking for a good "entry" casino game, it's also the perfect fit. Try some real-cash Caribbean Stud Poker today and earn a top welcome bonus when you open an account. 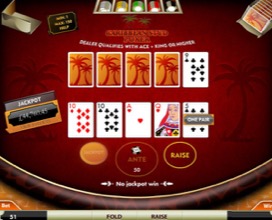 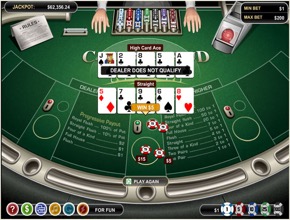 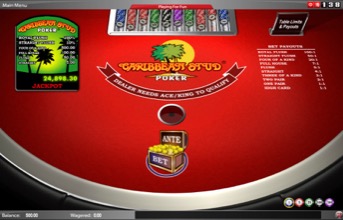 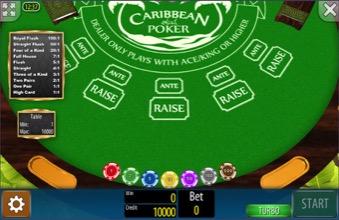 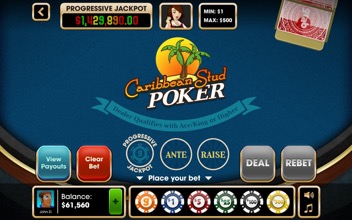 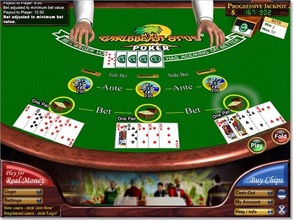 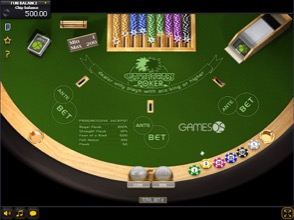 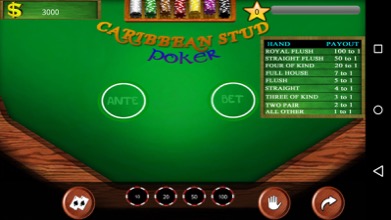 What is Caribbean Stud?

Caribbean Stud is a variation of online poker, which is played against the dealer instead of against other players. It is one of the most popular games at online casinos, thanks to the excitement that comes with every hand and the amount of money that can be won. It also often features a progressive jackpot, which is won by placing a side bet and then hitting the predefined card combination.

Players make an initial bet before receiving five cards. The dealer also receives five cards, with one of them dealt face up. The player then chooses whether to raise, and therefore continue the hand, or fold. If they raise, the dealer’s cards are revealed and the player with the highest hand wins. It should be remembered that the dealer has to have A-K or higher in order for the hand to be valid though.

How does it compare to regular poker?

The most obvious difference is the fact that this game is played against the dealer, and not against other players. There is also a much higher reliance on luck in Caribbean Stud, as the only slight element of skill is deciding whether to raise or fold.

Caribbean Stud has quite a high house edge, meaning that the house will win considerably more often than the player. This is in contrast to forms of video poker, which can have some of the lowest house edges around. So, it is best to play Caribbean Stud for fun, and treat any wins as bonuses.

In terms of the payouts for hitting different hands, a Royal Flush pays 100:1, a straight flush has odds of 50:1, and four of a kind has odds of 20:1. All other hands have considerably lower odds. The least that can be won is 1:1, which comes when winning with a pair or less. Remember that this game can also have a progressive jackpot though, which can reach into the millions.

Can I use a strategy?

Optimal strategy for Caribbean Stud is extremely complex, however there are two basic rules to remember: always raise when you have a pair or higher, and never raise if your hand isn’t better than the dealer’s qualifying hand.

Caribbean Stud can be found at numerous online casinos, as it is an incredibly popular game. We’ve reviewed many of them though, and think that the best places to play are InterCasino and BGO, as they offer great playing experiences and some nice bonuses.

Does it have a mobile version?

Caribbean Stud certainly has a mobile version, and it is actually one of the games that transfers best to mobile casinos. This is because it isn’t too complicated and doesn’t have loads of features, so mobiles can easily cope with running it.

Is it safe to play online?

It certainly is, providing you play at one of the casinos we recommend. This is because all of our recommended casinos have been rigorously checked to ensure that their security features are as good as possible.

A poker variant with a progressive edge?! Yup, Caribbean Stud is definitely one for those who enjoy chasing progressive jackpots but don't necessarily like playing the slots. To make sure you're playing at an online casino with a truly life-changing jackpot, take a look at our lists of where to play and make sure the big bucks are up for grabs before you start.