If you enjoy poker and slots, Aces & Faces will be right up your alley.

Similar to Jacks or Better, this online video poker game pays out if you hit at least a pair of jacks. The difference is that there are added bonuses for combinations of face cards like kings and aces. Plus, the large payouts for bigger hands are pretty exceptional.

At CasinoOnline, we find the very best Internet casinos that have Aces & Faces online casino play for real money. You can even try out the game for free first before committing with real cash.

On this page about Aces and Faces, you’ll be able to:

PLAY ACES AND FACES WITH THE BEST CASINOS

Aces & Faces is an online video poker variant from Playtech. It is played with five cards, and you can bet anything from one to five coins per hand.

After making a wager, you will be dealt five cards. As in Jacks or Better, select which cards to Hold and which to discard. Once your unwanted cards are replaced, you’ll find out if your hand is a winner. The payouts start at a pair of Jacks or better and work their way up to a Royal Flush.

Pair of Jacks or Better - 1 coin

When playing five coins per hand, the payouts multiple by five too, except for the Royal Flush, which pays out 4000 coins.

Unlike other video poker games at an online casino, Aces & Faces give players the chance to double their winnings. If you want to try your luck, all you need to do is select this option on the screen.

You’ll notice a pop-up with four cards face down and the dealer’s card facing up. Your goal is to pick a card higher than the dealer's card. If luck is on your side, your money is doubled. If not, better luck next time.

Strategy comes into Aces & Faces online casino play because of the bonus payouts on high four-of-a-kinds. That means a four of a kind should be your priority. Holding small pairs is fine, even if they're lower than jacks. However, flushes and straight flushes also offer big prizes, so hold four cards to a flush, and three cards to a Royal Flush.

Aces & Faces is available at most Playtech-powered online casinos. It's beginning to look a little jaded compared to newer games but still offers some exciting bonuses.

When hunting out the game, pick online casinos that come with great licenses and a reputation for fast, accurate payouts. You should also find sites that have regular audits to ensure a fair game every time.

How to Earn the Best Bonuses

Most casinos online offer welcome bonuses to new players. Some sites allow video poker to contribute towards the bonus 'play through' amount, but others don't. It's worth finding the best casinos that allows all video poker play to contribute.

Give our reviews a read today and pick out a great online casino that has Aces & Faces. All of our top picks guarantee safe gambling, big bonuses, and lots of banking options. 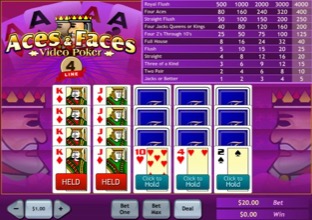 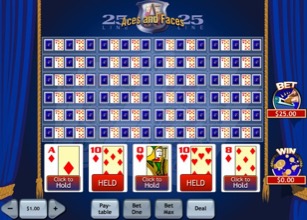 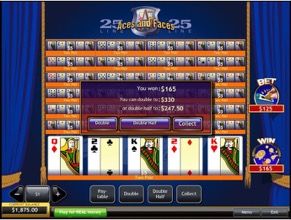 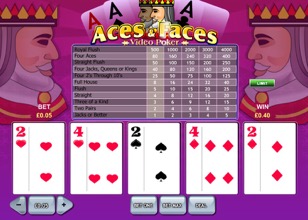 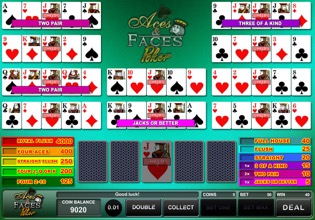 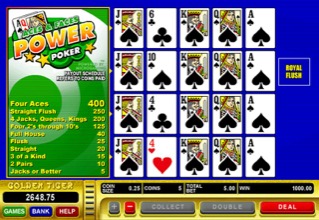 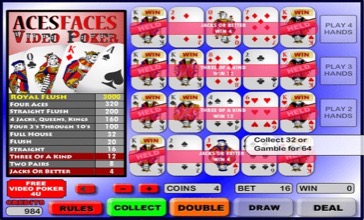 How does Aces & Faces work?

Aces & Faces is a variety of video poker. It follows the standard rules of this type of game, however there is one difference: the payouts are larger than normal when hitting four Jacks, Queens, Kings or Aces – hence the name of the game. You’ll first be dealt five cards, and will then have the option to swap some of them for new ones. The resulting five cards will be your final hand.

How do I play?

You’ll first be dealt five cards, and will then have the option to swap some of them for new ones. The resulting five cards will be your final hand. You will then win a prize if your hand is good enough to match the hands on the paytable.

How many bonus games are there?

Aces & Faces doesn’t have any bonus games, because it is not a slot – instead it is a bona fide video poker game, and therefore doesn’t need anything added to it. The excitement of the game should be enough to satisfy most players.

What is the maximum jackpot?

The most that can be won in one hand of Aces & Faces is 4000 coins, which comes when playing at the highest stakes and managing to hit a royal flush. Four of a kind and straight flush hands also receive large payouts in this game.

How can I win at video poker?

With optimum strategy, it is possible to win at video poker in the long term, unlike many other online casino games. There are many tactics to remember, but some of the important ones are never trading in high pairs, drawing to a high paying hand when possible and, if you have nothing in your hand at first, holding onto Jacks or higher while swapping the rest.

Where can I play?

Aces & Faces is available at many online casinos, meaning that American players can experience the game easily. InterCasino is our top rated casino though, and you will be able to find Aces & Faces there when you sign up.

Can I play on mobile?

You certainly can, as video poker lends itself very well to mobile play. This is because there are no fancy graphics or second screen bonus games, so mobile connections are able to handle this game really well. It does always help if you’re connected to a good Wi-Fi connection though.

If you play Aces & Faces at one of the casinos we recommend here on this site, you will have no concerns regarding safety and security. This is because we test all casinos thoroughly, ensuring that they have the mechanisms in place to keep you safe at all times.

One of the more popular types of video poker, Aces and Faces is an interesting game because of its "double or nothing" feature. Since it's a particularly enticing variant of video poker, you'll find Aces and Faces in plenty of online casinos. If you decide that you want to give the game a try, all you need to do is follow one of these links to find somewhere to play.